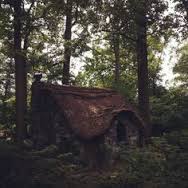 A shadow darkened the already dimly lit forest. Kiera could hear the dragon’s roar and knew that her grandmother would need the herbs she was picking very soon. Every time the dragon attacked, people came from the village for healing potions. The dragon had distracted the village elders from the witch hunt they were organizing. Healers from all around the land had been in hiding from the elders for months. Kiera’s mother and aunts were caught and taken away to the castle. No one had heard news of them, so there was a chance they could be alive.

She could smell the dragon fire. It must be close. Kiera picked a few more herbs and put them in her basket. Suddenly, she heard yelling from the meadow and realized that the King’s men were close. She turned and ran back down the path to her grandmother’s cabin.

Behind her, she could hear a loud commotion but she didn’t stop until she got home. Breathlessly, she came into the cabin and put the basket on her grandmother’s workbench.

“The king’s men are in the meadow. I think they are fighting the dragon, but they are very close!”

Her grandmother turned quickly. “Let’s go, child. Even if it’s the dragon they are after, we cannot take the chance they will find us!”

They gathered the herbs from the workbench into a basket, put on their cloaks and went out the door. Following a faint path behind the cabin, they went into the darkest part of the forest. Kiera kept close to her grandmother, not wanting to get lost in the dark or spirited away by the ghosts. They walked quickly and quietly until they reached the tiny stone hut where her grandmother’s grandmother had been born. This part of the forest never saw the sun, so she didn’t see the hut until her grandmother stopped.

The hut was musty. Her grandmother lit a candle. In one corner, the roof had collapsed and there was mold growing down the stone wall. Along one wall were the stone benches which served as seating and as beds. A large fireplace took up the back wall. Her grandmother went to the fireplace and lit a meager peat fire. The rest of the hut was dedicated to herbology: a large work bench and a cabinet which held crocks and tools.

Kiera set her basket down on the workbench and then got the bucket. The stream was only twelve steps from the door. She went out and rinsed the bucket and then filled it with cold, clear water. When she returned, she poured half of the water into the pitcher on the workbench. Then she used the remaining water to rinse off the benches, the small table and the workbench. Meanwhile, her grandmother was warming the stew she had brought from the cabin.