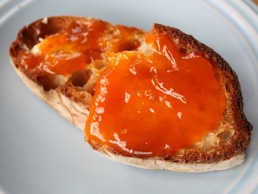 Introduction
This recipe is adapted from one by the British gardening maven Sarah Raven. The use of vanilla (and, if you choose to use them, the apricot kernels) gives this classic jam a subtle flavor profile.

Ingredients
3¼ to 3½ lb. whole fresh apricots, washed and dried
4 cups granulated sugar (if you have vanilla sugar, use that)
1 vanilla bean pod
~ Juice of 2 small lemons or 1 large lemon

Steps
Halve the apricots. Remove the pits and reserve 4 to 6 pits, if you wish to use them for flavoring. Quarter the apricot halves.
Put the apricot quarters and sugar into a large Dutch oven or other capacious pan and stir gently to combine. With a sharp knife tip, score the vanilla pod lengthwise, then slice the pod into thirds or quarters. Add the vanilla pieces to the apricots along with the lemon juice.
If you have time, let the fruit-sugar mixture macerate for a few hours. If not, gradually bring the mixture to a low boil, stirring occasionally so that the sugar dissolves evenly. Cook at a low-to-steady boil, stirring frequently to prevent burning, until the fruit has completely broken down and the mixture has thickened (at least 30 minutes but sometimes up to 1 hour, depending on the water and pectin content of the fruit).
If you wish to use them, prepare the apricot kernels while the fruit is cooking. Wash and dry the pits, then gently crack them open with a nutcracker. (You can also wrap the pits in a dishtowel and whack them individually with a hammer, but you will probably pulverize the kernels inside, making them harder to use.) The kernels inside look like almonds. Put the kernels in a heatproof measuring cup or bowl and pour a small amount of boiling water over them; let them sit in the hot water for several minutes, then rinse them in cold water to remove their papery skins. Add the kernels to the fruit mixture.
While the jam is cooking, bring a water bath to a boil in a large stockpot or canner and sterilize 6 half-pint jars in the water for 5 minutes. Put the rest of your canning tools (tongs, funnel, ladle, lids, ring bands, jar lifter, etc.) into a large heatproof bowl and pour boiling water over them to sterilize them (let them sit in the steaming water for several minutes). When the jars and tools are ready, use the tongs to remove the jars to a countertop covered with a clean dishtowel.
When the jam is ready, use your funnel and ladle to fill each jar, leaving ½-inch of headspace. (Try to evenly divide the vanilla bits and kernels between the jars.) Put the lids and ring bands on the jars and use your jar lifter to put the jars back into the water bath. Process for 10 minutes, then remove the jars to the dishtowel, spacing them so they don’t touch each other. Let the jars cool; as they seal, the lids will make audible popping sounds.
Store the jars of jam in a cool, dark place for up to a year. Once open, store in the fridge.
This content is from the Culinate Kitchen collection.